This is just a short note on Magic's progress. I am minus my laptop which is being repaired so pecking this out on a tablet while fending off Red who keeps standing on it!

Last week Magic and I undertook our Dick Whittington trip to London to get her pre-operative scan, which was the last investigation prior to her surgery. This confirmed she had a 6mm tumour in her pituitary gland and a transphenoidal hypophysectomy was performed on Monday afternoon.

She is now three day postoperative and despite a scare yesterday she is doing very well and charming her ITU team who are caring for her. She's not out of the woods yet as she has quite a bit of recovering to do yet but her team are monitoring her very closely and managing her condition very well.

I am so impressed with the quality and commitment of her Critical Care team. It is hard being 400miles away from her while she is going through this but I know she is getting wonderful care. I would have loved to stay nearby but thought it was better that I used my annual leave to be with her once I bring her home. This has been a very scary and stressful time for me as it has been hard to hand over my beloved girlie knowing how major an operation and recovery she would face.

Thank you everyone for all your prayers and purrs as they certainly seem to be working. I'll update you on her progress and fingers crossed she doesn't throw any more wobblies as I don't think my nerves could tolerate it.
Posted by RedSetter at 10:16:00 pm 15 comments: Links to this post 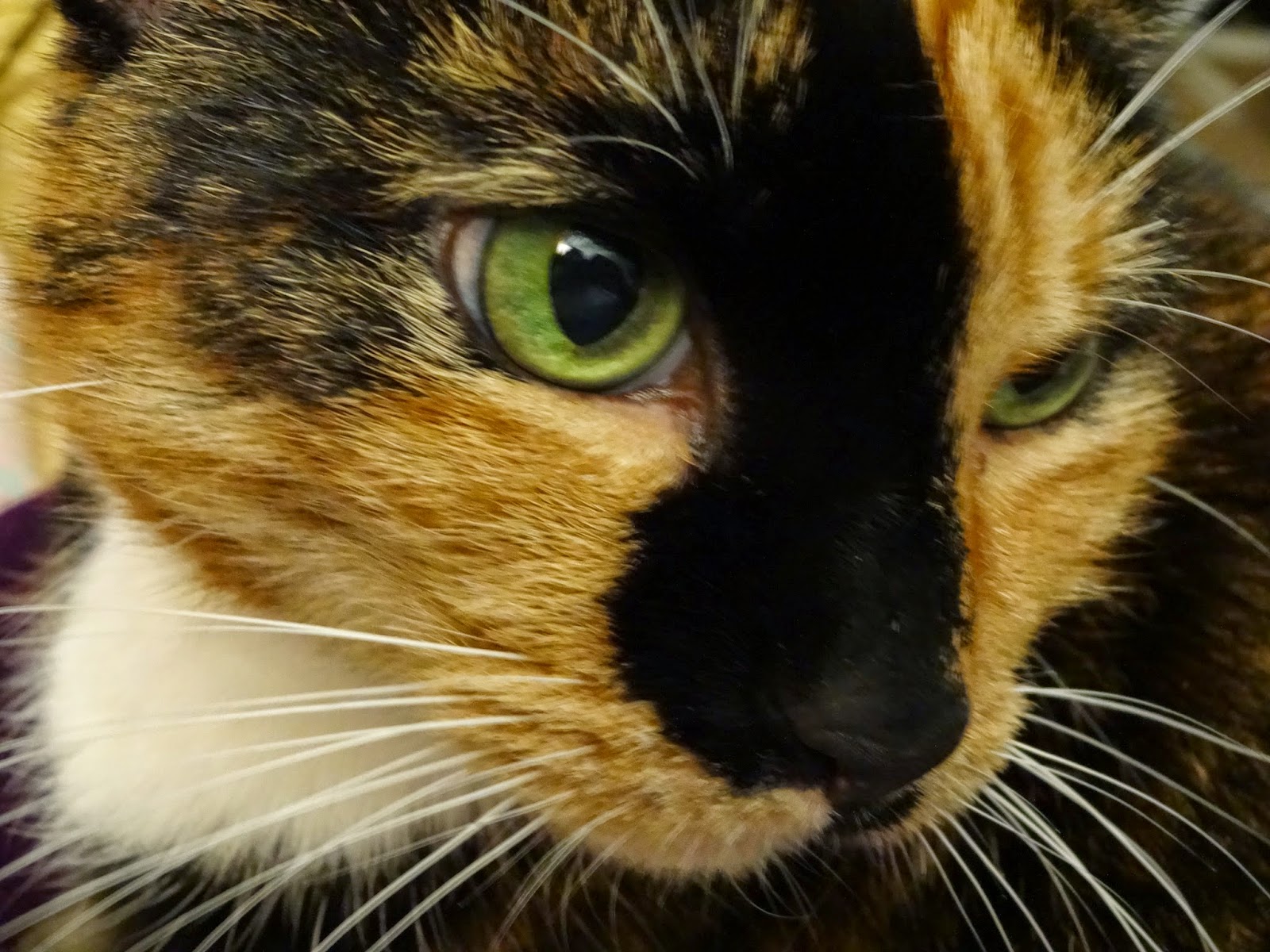 Feline acromegaly is a re-emerging area of interest for veterinary surgeons. It has had surges of interest over time for those cats who seem to tolerate very high doses of insulin with little apparent response. Recently the evidence base is still emerging but becoming stronger. Acromegaly is a tumour located in the pituitary gland of the brain which over-expresses growth hormone. This tumour is pulsatile which means the amount of the hormone it expresses can vary considerably.

Magic's condition has deteriorated to such an extent that on balance I feel my hand is forced and that neurosurgical intervention is the only realistic hope of curing or improving her diabetes and giving her a reasonable quality of life. Making this decision has been very hard. This surgery is fairly new and I am sharing our experience for anyone facing this situation.

Magic's illness became apparent on Friday the 13th in June 2014 when I realised she was non-specifically 'wasn't right' and took her to our own vet. She was so good/ill that I was able to get her to settle for an unsedated xray and the presumptive diagnosis was Hypertrophic Cardiomyopathy (HCM) and treated as such. Three more visits over the next few days saw her get sicker and sicker, stop eating and I was beside myself with worry. 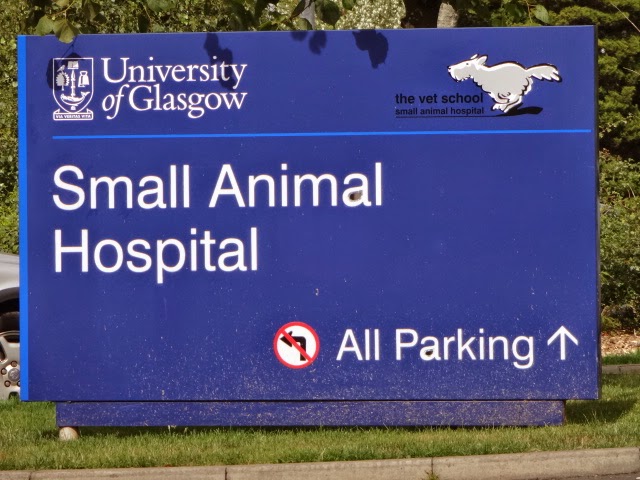 By the Wednesday night I could hold my nerve no longer as she was clearly deteriorating. I took her to the Glasgow Veterinary School Small Animal Hospital at 2am with dreadful fear in my heart. I left her in the care of the emergency vet team and came home and sat in the dark of the garden with a coffee praying, contemplating and worrying. The call came two hours later and I shook uncontrollably with something akin to relief as I learnt they had diagnosed her with diabetes. 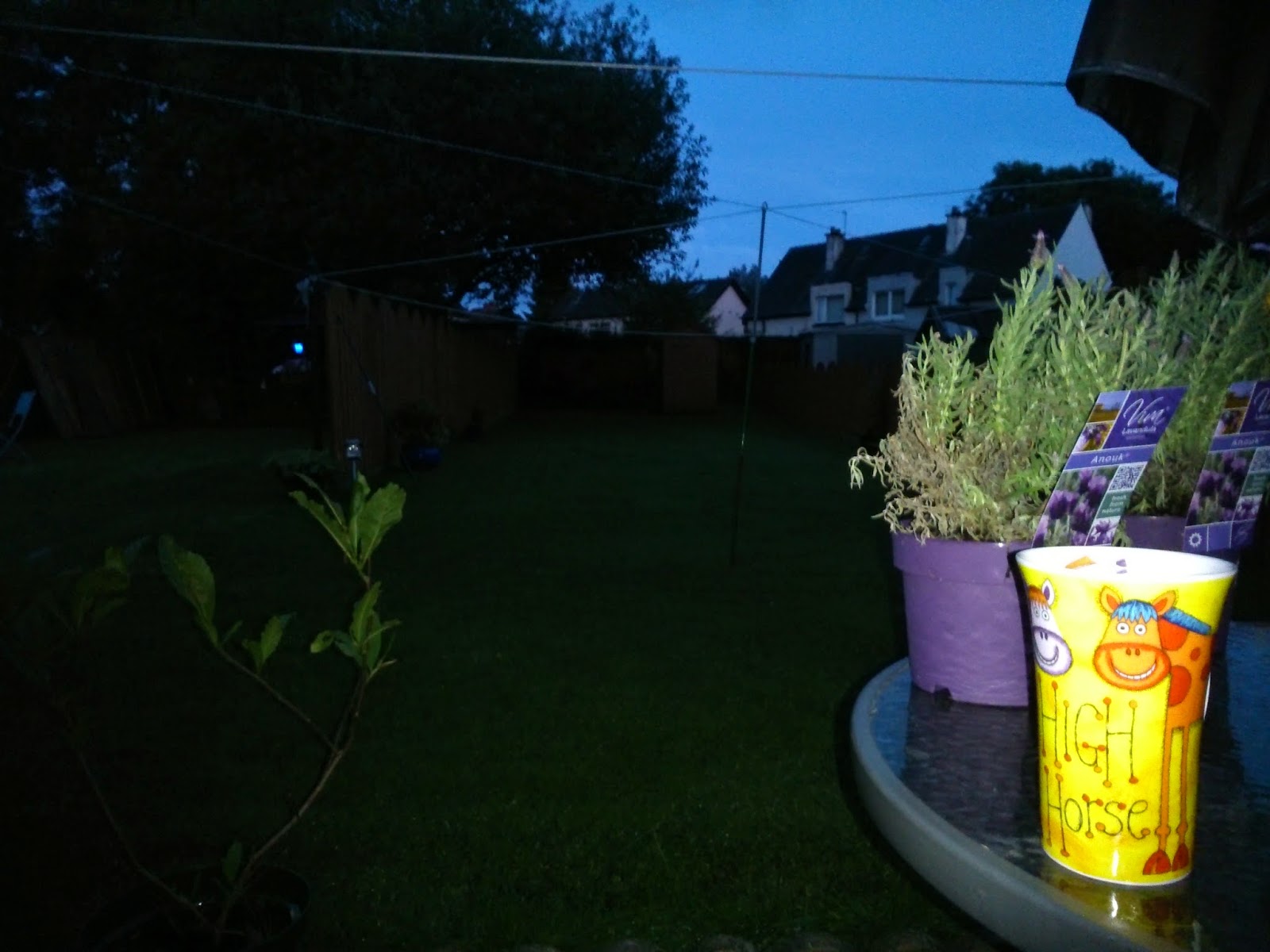 Compared to HCM, diabetes is a treatable lifelong condition. However, I was in no doubt how desperately ill she was and that her survival was perilous as she was in the throes of Diabetic Ketoacidosis (DKA). She remained in Intensive Care for five days, had respiratory problems, was being tube fed and there wasn't an organ that wasn't in dire straits including at one point the fear she was developing disseminated intravascular coagulopathy as she had problems clotting her blood. She was critically ill but she struggled through bravely and I was able to take her home.

This marked the beginning of a huge learning curve for me as her carer. At first she needed fed twice a day through an oesophageal tube, given an impressive schedule of drugs, blood glucose testing and given insulin injections. 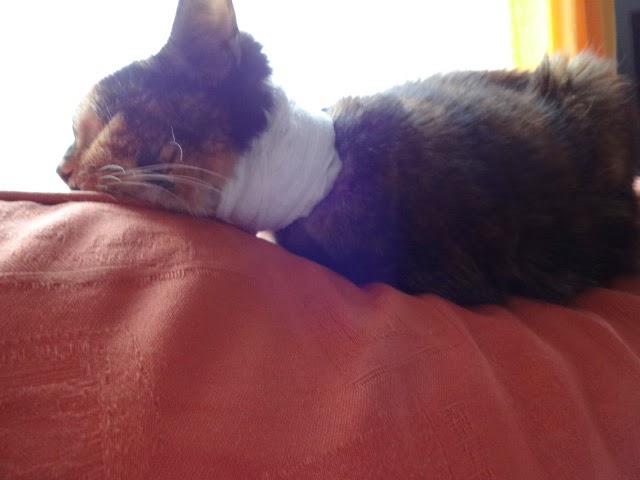 She was amazing and all I could do was be there to support her recovery including frequently replacing the hated neck bandage she'd try to scratch off. She came up to me when it was time for the whole process, sat obediently (mostly) while I fed her 0.5ml every 30 seconds till the whole 52mls of food, drugs and additional flush were given and I'd stabbed her ear to test her blood. 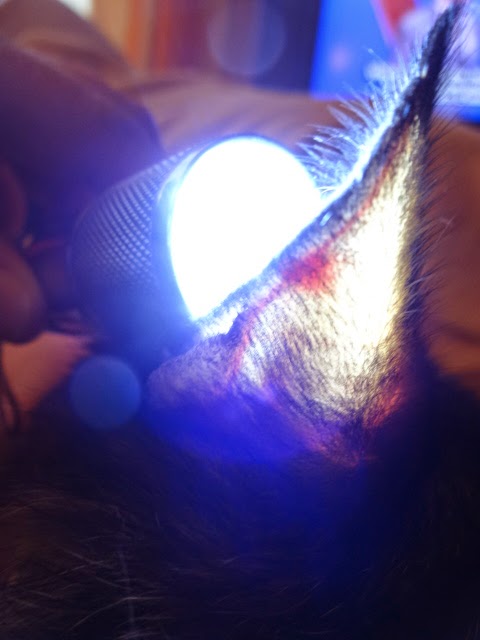 Things improved, the tube was removed after a few weeks, her blood sugars settled, her organs began to improve and she needed less and less insulin. She also tolerated my little handmade neck warmer that stopped her scratching the tube wound on her neck. 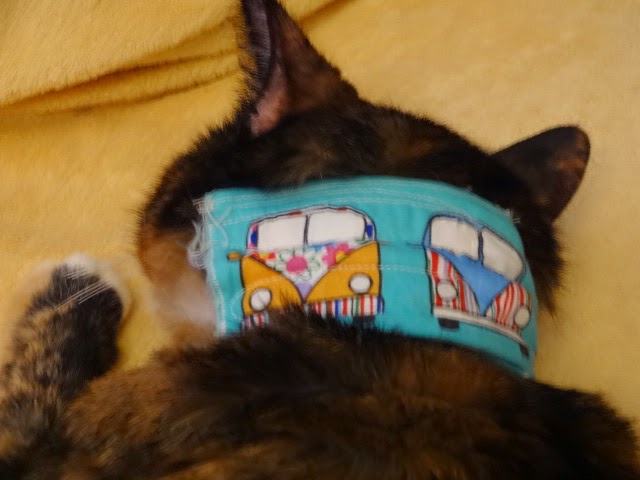 We were on the road to remission and recovery and could put this whole distressing incident behind us. Summer looked sunny.

In a few weeks Magic was on a half unit of insulin which was so small I could barely see to draw it up in the morning but she was showing blood sugars and fructosamine results which were entirely in the non-diabetic range. Then within a fortnight her readings got higher and higher until she reached 30 on the 2nd of Sept which is a dangerously high level. This began our intense battle to gain any kind of control. Her insulin was switched from Caninsulin to the human Insulin Glargine also known as Lantus which has a reputation for a more even glycaemic control and less risk of hypoglycaemia. We explored the option of Magic as a candidate for the Diabetes Remission Trial at the Royal Veterinary College in London but the attendance schedule would have been prohibitive and not in her best interest.

As it became clear the insulin resistance was not a blip or phase we began further testing starting with an Insulin-like Growth Factor-1 (IGF-1) test for acromegaly test. After a nailbiting wait, as the test is only run in Cambridge weekly, her result came back at 2000. An IGF-1 result of 1000 is considered diagnostic of  acromegaly. This gave a reason for her insulin resistance but opened up some pretty scary treatment options including surgery and radiotherapy which I didn't even wish to have to contemplate.

This was my summary of the four main treatment options:
Escalating insulin therapy to achieve control-this is the most common route particularly as surgery has not been an option until very recently.
Drug therapy with human drugs-  this has a poor impact as there are issues regarding how well the drugs cross the blood/brain barrier. Some newer human drugs are apparently showing some promise.
Radiotherapy - This involves 20 sessions with an accompanying anaesthetic each time. This can have side effects post therapy and results can be variable. There are newer protocols with only 5 or 10 sessions.
Surgery- Transpenoidal Hypophysectomy, removal of the pituitary gland through an incision in the mouth to access the skull and the pituitary gland, is an emergent treatment option. It has shown good success in bringing about either complete remission or a return to insulin sensitive diabetes. For cats who survive the surgery the outcomes have been positive. Only a small number of cats have been treated in this manner, the surgery is not without risk and the recovery needs to be intensively managed.

I read every research article that I could find and had a number of long conversations with our own vet in Glasgow. My decision was to pursue the most common option of increasing insulin doses to try to get to a level where response occurs. This is what we've been doing and frankly it has barely shown an impact on her blood sugar level which I test at least twice a day. My sweet little cat was receiving 21units of insulin twice a day with a negligible effect as her blood sugar generally remained around the mid-twenties. 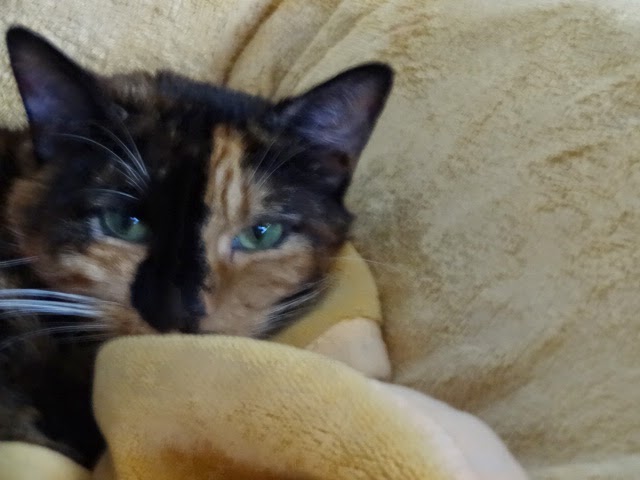 At the beginning of December 2014 she had a couple of nearly normal readings which would have been cause for celebration had they been sustained and related to her treatment. However, they were spurious and far more likely to be the result of the tumour activity varying. This finally made me realise I had to make the decision to go down the surgical route. The factors I decided it on were that she was getting no relief from increasing insulin doses, she was constantly hungry, thirsty and unsettled. In addition, and selfishly for me, I know that the likelihood of me administering her insulin is going to coincide with a dip from the tumour at some point and she is going to die of a hypoglycaemic event in which I effectively gave the fatal dose. I adore my little Magic and have always done everything to make her life good so I cannot imagine living with the guilt of having given her a treatment that is having little to no benefit with an increasing risk. So for me the surgery now moved from a 'high risk' to 'high risk/ high benefit' category for us.

Disclaimer: I am the owner/servant of my beloved cat, Magic, who has a diagnosis of insulin resistant diabetes due to acromegaly. I have no veterinary experience and share this series of posts purely as my personal experience of the condition and treatment and not as any kind of veterinary advice.
Posted by RedSetter at 12:49:00 am 18 comments: Links to this post 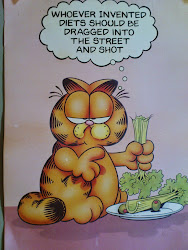